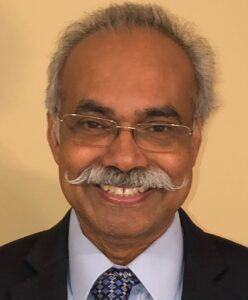 Dr. Thomas Thundat is an Empire Innovation professor in the Department of Chemical and Biological Engineering at the University at Buffalo, The State University of New York, Buffalo, NY. He is also Distinguished Professor (honorary) at the Indian Institute of Technology, Madras. He was a Canada Excellence Research Chair professor at the University of Alberta, Edmonton, Canada (2010-2017). He was a research group leader for Nanoscale Science and Devices Group, and a UT-Battelle Corporate Fellow of the Oak Ridge National Laboratory (ORNL) until 2010. He received his Ph.D. in physics from the State University of New York at Albany. He is the
author of over 450 publications in refereed journals, 85 conference proceedings, 45 book chapters, and 45 US patents. He is an elected Fellow of the American Physical Society (APS), the Electrochemical Society (ECS), the American Association for Advancement of Science (AAAS), the American Society of Mechanical Engineers (ASME), the SPIE, American Society of Biomedical and Biological Engineers (AIMBE), Institute of Electrical and Electronics Engineers
(IEEE), and the National Academy of Inventors (NAI). His research is currently focused on developing new concepts in nanomechanical sensing, energy conversion, electrical energy transmission using single wire, and novel concepts for charge separation and storage.