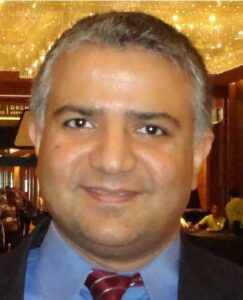 Anuj Dhawan received a B. Tech. degree from IIT Delhi and the M.S. and Ph.D. degrees from North Carolina State University (NCSU), Raleigh, NC, USA. He worked as a National Research Council (NRC) Research Associate with the Electronics Division, U.S. Army Research Office (ARO), Durham, NC, USA, from 2007 to 2009, and a Research Scientist of the Fitzpatrick Institute for Photonics, Duke University, NC, USA, from 2009 to 2011. Since 2011, he has been with the Department of Electrical Engineering, IIT Delhi, where he was an Assistant Professor from 2011 to 2016 and an Associate Professor from 2016 to 2021. Since 2021, he has been a Professor with the Department of Electrical Engineering at IIT Delhi. He is currently also the Head of the Center for Sensors, Instrumentation, and Cyber Physical Systems (SeNSE) at IIT Delhi. He has authored more than 135 publications (including more than 75 publications in journals of repute), filed several U.S. and Indian patents, and has led several sponsored research projects as a Principal Investigator at IIT Delhi. His research interests include flexible electronic and photonic devices,
applications of flexible electronics such as flexible antennas, flexible optical sensors, plasmonic and optoelectronic devices, chemical and biological sensors, integrated photonic devices, integrated nano-scale
systems, nanofabrication, and computational electromagnetics.