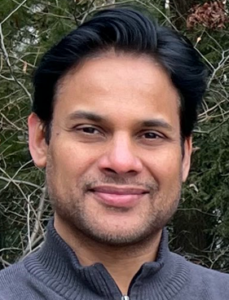 Dr. Raj Kothapalli is an assistant professor in the Department of Biomedical Engineering and Penn State Cancer Institute, at the Pennsylvania State University. He received his Ph.D in Biomedical Engineering from Washington University in St. Louis in 2009 and received postdoc training in the Molecular Imaging Program at Stanford University in 2014. He served as an instructor in the Department of Radiology at Stanford University from 2014 to 2016, before joining Penn State in 2017. His BioPhotonics and Ultrasound Imaging lab at Penn State is focused on developing novel multimodal biodevices combining optical, ultrasound and photoacoustic imaging technologies. In 2014, Dr. Kothapalli received K99-R00 Pathway to Independence award from National Institutes of Health.